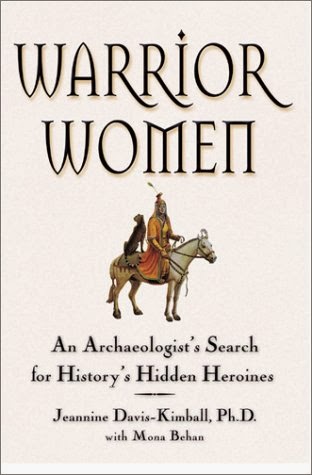 This book is awesome sauce. Jeannine Davis-Kimball's interestingly written and amazingly information Warrior Women: An Archaeologist's Search for History's Hidden Heroines was just what I needed to get me out of my all YAL SFF, all the time rut.

Davis-Kimball came to archaeology late in life - or at least later than the norm as she had already had a "life" prior - but man did she attack her new career with awesome dedication. The woman impressed me almost as much as the book, and that's saying something as I found the book very impressive.

Davis-Kimball's focus on powerful women in history is the result of her work with Eurasian burial grounds. During her digs in the steppes, she, quite literally, unearthed evidence of egalitarian societies, of women warriors and priestesses, of powerful (to use today's vernacular) housewives and mothers. And she uncovered for me - what was probably not surprising to her - that patriarchal societies (including the modern one) actively work to suppress evidence suggesting that women were anything more than subordinate to men. Ever. Even today, our powerful women throughout history are presented as out of the ordinary, as uncharacteristic and commendable examples of womanhood, as ones who rose above their allotted space. Turns out that space may have been allotted much later in our history than previously imagined; then again, we seem to operate under the assumption that women were (are) inferior from the very beginnings of time, so maybe that's not saying much.

While primarily interested in the role of women in Eurasian nomadic societies, her discoveries with these cultures led her to Western cultures also as archaeological evidence quite clearly suggests the two societies were in contact - even blended living spaces. Caucasoid mummies have been found in China, and religious and cultural iconography and even clothing styles appear in both Eurasian and Western digs. Yeah, stuff like this geeks me out. The idea of two cultures so removed from each other geographically meeting and sharing is just freaking awesome. It's not like travel was easy-peasy back then, and it takes some serious balls to wander into the unknown with very little and no real way back.

I could regale you with tale after tale, with fact after fact; the book is brimming with interesting tidbits that are both entertaining and insightful. I even started marking pages so I could add in this or that fact to the review. But I marked so many pages that I realized the best thing I could do would be to urge you to read this on your own.

The writing here is accessible, academic, and narrative; Davis-Kimball's voice is relatable, and I enjoyed listening to her (figuratively speaking). And there are sidebars and footnotes - which I love. Unreasonably so to be honest. I have a thing for sidebars and footnotes, and the ones in this book are certainly worthy of my love.

My only issue with the book concerned the structure. There is very little regard to chronology, and at times, 'what came first' actually is an issue. Placing the discoveries in context is important for a comprehensive view, and very little of that occurs here. It's almost as if I am being given chunks of information which I have to piece together myself to see the big picture. For someone very unfamiliar with the topic, this is not exactly easy, and I would have preferred a bit more in the way of organization.

Overall though, I so thoroughly enjoyed reading Warrior Women that I'm 80% sure I am going to break my new rule regarding donating books I've already read. Yep, I may have to keep this one on my shelves. Bad me.
Posted by Trisha at 4:00 AM