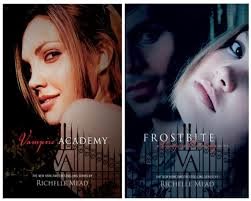 The Vampire Academy series by Richelle Mead did not come to my attention because of the upcoming film release. No, this still-plastic-wrapped trilogy had been sitting on my shelf for months (like lots of months, not like two months). Finally, I picked it up, and read the first two in five days.

The series begins with Rose and Lissa on the run from St. Vladimir's, a high school for Moroi (peaceful vampires) and dhampir (the race which protects them). This "in the middle of the action" start drove me bonkers. I actually stopped reading to see if I was accidentally reading the second installment. Annoyance.

The exposition - background information necessary to understand the conflict - unfolds throughout the action, including the reasoning for Rose and Lissa's escape from high school and of course the world of the story. A pattern of letting readers know what they need to know about the past when it is necessary in the present continues throughout the two books. And sometimes - for example the "twist" in book 1 - that lack of knowledge and its timely inclusion - felt contrived and made for a lack of depth to the plot.

Overall, these two stories revolve around Lissa discovering her extraordinary powers which have been either actively denied or clouded in myth by the Moroi vampires. Her development is paralleling a culture war: the Strigoi, dead evil killing vampires, and the Moroi, peaceful to the point of childish vampires. Both groups are evolving - or on the verge of evolving - with the Strigoi adjusting their traditions to account for their new plan on killing Moroi royals and the Moroi, at least some of them, figuring out that absolute pacifism makes you a victim (not to mention something of an asshat when you rely on a race of people for your own survival). Honestly, I do find all of this quite interesting - particularly the moral dilemma of one race of people dedicating their entire lives to saving another - however, the lack of depth to the world coupled with a few other annoyances means I will only be reading the first two books in this quite long series.

My other annoyances - I didn't like a single character in these books, and the writing was repetitive enough to have me cringing. Our two main characters Rose and Lissa are too childish (in completely different ways) for me to relate to either one. I continuously found myself wanting to slap them for their stupidity. I do realize, however, that the large age difference between me and them has a lot to do with this. I suppose they are "acting like teenagers", but based on my reading of other YAL and well, me being a teenager at one point, I believe they are acting like the most self-absorbed, narcissitic teenagers possible. They believe they are constantly in the right, they act without forethought or honestly any thought, they never ask for help, they spend more time worrying about what to wear to a party than about whether or not they should do this really stupid thing, and so on and so forth.

Obviously I did not love these books; I did, however, read them quickly instead of just setting them aside. While I spent a bit of time rolling my eyes while reading, the stories were interesting and fast enough to at least hold my attention and make me, in part, want to keep reading. After two, though, I'm done.

The part of me that craves conclusion and symmetry wholeheartedly rejects the fact that I will not be reading the third book in the series; however the part of me that wants to dedicate my miniscule reading time is interested on reading better books than these. And I hear this series doesn't stop with the third book anyway, so I definitely don't want to waste my time.
Posted by Trisha at 4:00 AM