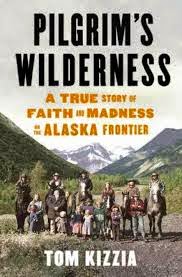 Pilgrim's Wilderness: A True Story of Faith and Madness in the Alaska Frontier by Tom Kizzia, a summary in less words than the title: Whackadoodle patriarch abuses family and pisses off everyone else.

Oh my Jehoshaphat ladies and gents, this book was crazy reading. I was horrified, I was morbidly awed, I was politically outraged, I was personally offended, I was arrogantly disbelieving, I was floored. If I pick up a book about an uber-religious family with 15 children who want to backwoods it out in the wilds of Alaska, I know what I'm getting into. I have yet to read - or even hear of - such a family where things weren't horribly wrong. And yet still, I'm reading, and I'm shocked.

Here's the description from Amazon: In Pilgrim’s Wilderness, veteran Alaska journalist Tom Kizzia unfolds the remarkable, at times harrowing, story of a charismatic spinner of American myths who was not what he seemed, the townspeople caught in his thrall, and the family he brought to the brink of ruin.  As Kizzia discovered, Papa Pilgrim was in fact the son of a rich Texas family with ties to Hoover’s FBI and strange, oblique connections to the Kennedy assassination and the movie stars of Easy Rider.  And as his fight with the government in Alaska grew more intense, the turmoil in his brood made it increasingly difficult to tell whether his children were messianic followers or hostages in desperate need of rescue.  In this powerful piece of Americana, written with uncommon grace and high drama, Kizzia uses his unparalleled access to capture an era-defining clash between environmentalists and pioneers ignited by a mesmerizing sociopath who held a town and a family captive.

The amount of hoopla in this book is both adrenaline inducing and heart wrenching, and it is always, always amazing. Focused primarily on the landowner's battle the Pilgrims faced in McCarthy, the story also recounts the strange journey the family took to arrive in this "can't get more out the way" place and their exodus from it. Family dynamics, political intrigue, religious fervor, neighborly love, so much is touched on. It's all evocative and it's all weird. Sorry if that's offensive, but crap like this is weird to modern-convenience-loving, single child, atheist me. Check this out: 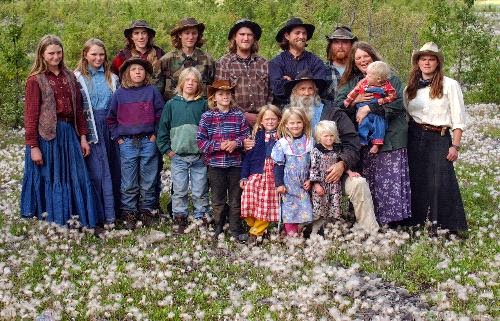 A good looking family for sure, but you can just tell that opening the front door of their smaller-than-my-living-room cabin is the equivalent to opening a door to hell. I mean this in a non-judgmental, but rather sympathetic kind of way. The only person in this picture who deserves judgment and damnation is the father.

At first, I was confused by the happenings and the people - there's a lot doing here and a lot of people doing it. But once I got into the story, I let the minutiae fall away, immersed myself in the tale, and just went with it. Even at the end, there were a few names where I had a hard time recalling their earlier importance. But Kizzia kept me involved enough that it didn't necessarily matter. I knew who the big dogs were and that was enough.

This is truly a fascinating tale, and I have Sandy from You've Gotta Read This to thank for it. She mentioned this book in passing, saying the book is "a non-fiction-they-can't-make-this-stuff-up kind of book that makes you feel like your head is going to explode.  In a nutshell, it is about a incestuous, narcissistic, bible-thumping madman who homesteads in Alaska with his brainwashed wife and 15 kids, and ends up taking on the National Park Service and the law for his sins.  Amazing, maddening stuff." Her description made me "nook it". [To nook it: to immediately download a book from Barnes and Noble with minimal thought].

I highly recommend you go nook it now.
Posted by Trisha at 4:00 AM