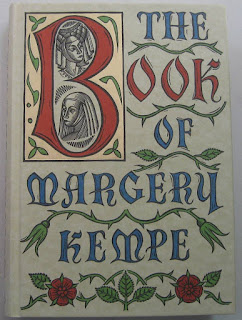 In The Book of Margery Kempe, the first chapter, "The Birth of Her First Child and Her First Vision," functions as the exposition and inciting incident of the tale. The chapter begins by setting the stage, letting readers know how about Kempe’s marriage at 20, her quick conception, and her illness while pregnant. She writes that she was plagued by devils and that she never fully confessed her sins to her priest, and while this troubled her, she was as afraid of “his sharp reproving” as of damnation (Kempe 426). The demons continue to appear to her, and her demeanor was sharply affected as she “slandered…she spoke many a reproving word…knew no virtue or goodness…desired all wickedness” exactly as the demons wanted (Kempe 426). Relief came only when Jesus appeared to her. His appeal to her is the inciting incident, the moment Margery’s struggle to pure faith begins.

This is also the point the first chapter ends. As I said, this chapter sets the reader up for what is to come next. We have been provided with the background information necessary to understand what dire straits Margery was in and we have seen the moment in time her transformation begins.

In my opinion, the most interesting point this episode relates is Margery’s fear of confession. Judgement is just as scary as damnation to Margery, and this fear keeps her from confessing some grievous past sin to her priest. She calls him to her, fully intending to confess, but he was “too hasty and began sharply to reprove her…so she would no more say for aught he might do” (Kempe 426).

Researching confession in the Middle Ages, I find that Kempe certainly had a right to be nervous about what her priest would say. According to Andrew Reeves, there were texts confessional priests used in order to assign punishment for sins which “were often extreme (to the point that the administrator of the penance would often remit it to a fine or lighter penalty) (374). For a townsperson like Kempe, large monetary penalties would certainly be worrisome. Combine that with the fact that “the penitentials placed little emphasis on the internal state of the penitent, whether he or she was actually contrite” (Reeves 374) and Margery is certainly not in a position to be inclined towards confession. She is clearly looking for contrition rather than penance, and it seems like she wasn’t going to get it through normal avenues.

Confession for Catholics is a recitation of specific sins to a priest. This recitation is required as the priest functions as the intermediary between God and the person. Obviously, here that function is not fulfilled. Later in The Book of Margery Kempe, the concept of a priest as go-between is again subverted when Christ appears directly to Margery; actually she speaks directly to him on multiple occassions. It is possible the book is challenging this particular doctrine; however, if the text is challenging religious practices, how do we justify that with the fact that a cleric wrote this? While the words are supposedly Margery Kempe’s, it was written by a priest-scribe and more than likely revised over the years. So why keep the challenges to the Church? How did this radical document survive when it challenges so much?

If you haven't read this book, I highly recommend doing so. I've only spoken about the first chapter, and believe me, what comes after is just as (if not more) interesting. I mean, Margery actually convinces her husband to have a chaste marriage; she goes into fits and hysterics; she speaks directly to Jesus, who I might add is an attractive man. It's a fascinating story - and one of the first autobiographies of the English language.