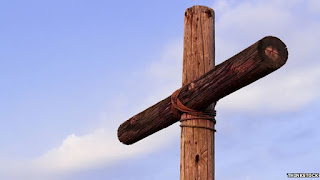 The York “Crucifixion”, which you can read here, chronicles the conversation between four soldiers who are nailing Jesus to the Cross; Jesus himself speaks only twice. For the four soldiers, this is their job. Their conversation is not particularly political or emotional. When they realize that the bored holes for the nails are a bit too far apart, they simple make Jesus's body a bit longer so the holes line up. Gruesome.

They are simply fulfilling their duty; although they do appear to take a certain amount of pleasure in torturing Jesus. At the least, they do not care about the pain he is in; as the First Soldier says, “It is no force how fell he feel” (136). The Fourth Soldier even abuses Jesus: “And I shall fond him for to hit” (139). The soldiers go on:


1ST SOLDIER. These cords have evil increased his pains
Ere he were till the borings brought.
2Nd SOLDIER. Yea, asunder are both sinews and veins
On ilk a side, so have we sought. (York Crucifixion lines 145-148).

After this horrifying conversation, the four soldiers go back to the job at hand which they are upset to learn includes carrying the cross, with Jesus already nailed to it, up the hill, “on height that men might see” (156). They struggle to get the cross up the hill, but once they get him up there, they fall to drawing lots for Jesus's now-abandoned belongings.

I first wondered why the playwright chose to make the play so remarkably cringe-worthy. Research quickly gave me an answer. In the early fourteenth century, Franciscan theology “exhorted the consideration of the practical details of the Crucifixion and Christ's suffering as a means of understanding the immense gift which the sacrifice offered to mankind” and encouraged “the contemplation of the minute details of the Crucifixion as a meditation aid to understanding the nature of Christ's sacrifice and to appreciate the potential of Salvation it represented” (Faust 158). To paraphrase, they wanted you to look closely at the details of Christ's suffering so you would be grateful. I do wonder how effective this strategy is: Do you think the combination of horror and appreciation felt from contemplating Jesus's suffering causes a permanent change or just a temporary feeling?

What’s really interesting to me is that according to the Norton Anthology, “the subject of the play corresponded to the function of the guild (thus the Pinners, or nail-makers, performed the York Crucifixion, for example)” (Greenblatt 448). This means that the Pinners were presenting their profession in a less than inspiring role.

Then again, this complicity in the crucifixion may be the point of the play. By highlighting the work of the soldiers, by having them as the speakers, the audience relates to them more so than to Jesus. This choice by the playwright directly points out the ability of every human to commit great evils. As Stanley Milgram pointed out after his famous electric shock experiments:


“This is, perhaps, the most fundamental lesson of our study: ordinary people, simply doing their jobs, and without any particular hostility on their part, can become agents in a terrible destructive process. Moreover, even when the destructive effects of their work become patently clear, and they are asked to carry out actions incompatible with fundamental standards of morality, relatively few people have the resources to resist authority.” (qtd. in Faust 159)

Do you think this poem effectively places people in the positions of torturer? Does the audience really relate to the soldiers enough to make them feel complicit in the Crucifixion? Is it all spectacle for the purpose of entertainment?