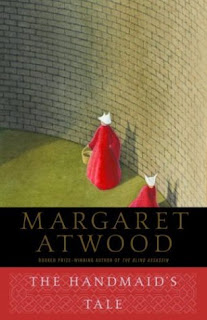 Offred, a Handmaid in the Republic of Gilead, narrates her story. Told in fragments, Offred introduces readers to a world where women are partitioned out: a wife, a servant, a walking uterus. While she can remember her life before, a relatively normal life, she has become immersed in this new order, at once resisting and accepting her role.

I am horrified, horrified by the warning inherent in the book. The believability of the civilization created within these pages spoke to me. First published in 1985, bits and pieces of the justification for the Republic resonate. Everything is "blamed on the Islamic fanatics"; this was done for the protection of women from rape, sexual slavery, and physical abuse; the suspension of personal freedoms were temporary; consistent identification is needed and "everyone approved of that, since it was obvious you couldn't be too careful"; and little by little rights and freedoms were denied to select groups with nary a word of protest. Everything being done to you and against you is done for you. It's all for your own good.

How far will a society go, how much will it sacrifice, for safety? For power? These questions, so prevalent in Atwood's book, are increasingly relevant in American society today. As we relinquish what were once considered our rights for protection against "terrorism", we slide further away from the ideal of democracy the country was founded on (albeit through violence, racism, and genocide). As we further objectify ourselves, elevating physical beauty and commodifying our bodies, we become less individual humans and more subject to social control and acceptance of our own lack of self worth.

And yet when I ask myself: Is Atwood's vision a likelihood? Will women be once again subjugated to male property under the auspices of protection? I have to say no. I believe in the goodness of men (literally males). I believe that women will not allow such a regression to take place. Of course, when Clinton ran for president, a few of my students made disheartening remarks about a female being president. Female students, under 22. Sad. Women are women's worst enemies.

Outside of the themes inherent in Atwood's tale, the story itself entices. At first discouraged by the short, choppy sentences and fragmentary retellings, I eventually became rather in tune with them, reading at a quick pace, easily comprehending the bite-sized bits of information given to me. I also felt this style highly appropriate for the narrator. Having been removed entirely from literacy and having verbally narrated the tale, Offred's voice, her pacing and disjointed sense of telling seems necessary.

I sincerely hope this tale is non-prophetic. As with all dystopian literature, I hope societies learn from the story, see their flaws as printed on the page and prevent the horror from happening. Of course, for this to happen, we have to read these tales.

The Handmaid's Tale is number 37 on the ALA's list of most frequently challenged books. What I find sad in this is that the book is normally challenged because it portrays the mistreatment of women. EXACTLY! The novel is a warning not an encouragement. What do we do? Ignore the possibility? Pretend that this mistreatment isn't a truism of the past, present, and possibly future? When will people realize that ignoring a problem doesn't make it go away? And that if you don't "nip the problem in the bud" so to speak through awareness and prevention, you may one day see Atwood's dystopian future? Maybe if we don't let kids hear the word rape, rapes won't happen? Yes, let's not warn anyone; they'll learn later.

Of course challenges to the book are made on other grounds as well: That it's anti-Christian. It's not; it's anti-fundamentalism. That it portrays sex. Yep, and people have sex. That it vividly describes birth and menstruation. Ovaries, vaginas, and blood, OH MY! I highly recommend reading this book both for the lessons within, and for the less socio-political amongst us, for the story itself.

Memorable Scene: At one point, the handmaids are gathered together for one purpose: the violent killing of a man they've been told raped a handmaid. The women use their bare hands to rip this man apart. Disturbing.

Memorable Quote: "That was when they suspended the Constitution. They said it would be temporary. There wasn't even any rioting in the streets. People stayed home at night, watching television, looking for some direction. There wasn't even an enemy you could put your finger on."

Side note: My spell check does not recognize the word vaginas...interesting.

The Book Lady's Blog
The Boston Bibliophile
Book-a-Rama
things mean alot
In Spring it is the Dawn
Rebecca Reads
The Zen Leaf
Posted by Trisha at 5:23 PM