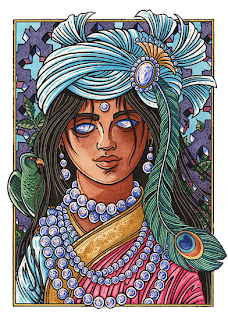 To top off my Neil Gaiman reads for The Dream King Challenge, I decided to read a few short stories which are available online.

I'm not going to tell you much about these three short stories by Gaiman. A taste is all you shall receive, a little piece of temptation which will hopefully inspire you to click on the story name and read the stories for yourself.

Cinnamon - A princess, whom none can make speak, has a life changing talk with a tiger. Mentioned at A Striped Armchair;

I Cthulhu - Also known as What's A Tentacle-Faced Thing Like Me Doing In A Sunken City Like This (Latitude 47° 9' S, Longitude 126° 43' W)?, I Cthulhu reads like the journal entry (technically a speech to a subordinate) from a powerful being that came to Earth literally in the primordial sludge. And two awesome quotes:  "...born of nameless nightmare parents" and "Riot and revel, blood-food and foulness, eternal twilight and nightmare and the screams of the dead and the not-dead and the chant of the faithful."

How to Talk to Girls at Parties - Two boys wind up at the wrong party with unusual girls. Vic, a more alpha male, is good with the ladies, but our unnamed narrator is a bit shy. As Vic says, "They're just girls...they don't come from another planet." But he could be wrong. Reviews:  Gripping Books;

If you've reviewed any of these three stories, let me know, and I'll add in your link.