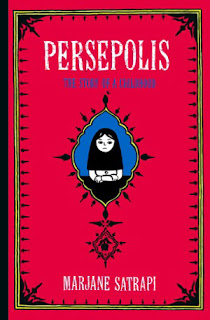 Plot Synopsis
Persepolis is the remembrances of a young girl growing up in Iran during the Revolution.

My Thoughts
The limitations placed on people and the struggle to free one's self from those limitations is a heartbreaking topic.  Each story Marji relates and illustrates reminds me of how good I have it, and reminds me that those across the oceans are not so different.

Marji's Marxist parents allow her to be a freethinker, challenge her to question the Shah and the subsequent regime which attempt to impose ideology upon the country.  Marji questions her teachers, revels in stories of revolutionary heroes, and rocks out to rock and roll in her Michael Jackson jacket and forbidden blue jeans.  In the midst of cultural repression and the subjugation of women, Marji is all punk and sneakers.

In this graphic novel, the relationship between the images and text is symbiotic, each necessary to the other for the full story to be told. The images do not merely visualize the text, they add to the text, and sometimes do so in a dramatic fashion.  Juxtaposing words of pride in the heroic men with images of the dead really highlights the ideas of a child with the reality of a war.  I was impressed by the starkness of both the words and the images.

Side Note: Persepolis has a sequel which I'm bound to pick up sooner or later.  Some of the linked reviews below discuss both stories.

Memorable Scene:  A teacher who had been telling her students that the Shah was put in power by God does a complete turnabout once said Shah has been displaced.  Marji calls her on this contradiction.  Go Marji!  Bad teacher!


Memorable Quote: If hair is as stimulating as you say, then you need to shave your mustache! You have to read the book to see the funny.

Question:  Do you guys know of any other non-fiction graphic novels? I really enjoyed this - and probably would not have read it if it wasn't a graphic novel.