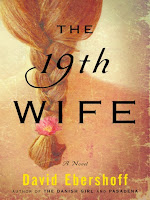 Take a Chance Challenge
Become a Character:  For this challenge, you can read any book you want. However, you have to write about the book as one of the characters from the book.

When Jordan Scott stopped by the jail, I was surprised to say the least.  After the release of his mother, I had expected to never see him again.  He wanted me to read a recently published book that I had a small part in.

Now I for one can't begin to fathom any woman allowing herself to be used so abominably as the rumors I hear coming from that town. I always believed those women wanted nothing more than to escape their lives but were too scared and too abused to go about it.  But BeckyLyn, that's her name, made me see a scarier side; she didn't want to leave, she loved her husband, and she completely believed in that ridiculous marry many and marry them young crapola of her faith.  She sure didn't seem like a woman who had just killed her bastard of a husband, more like a grieving widow.  And I guess Jordan saw a bit of the same thing in her since he started his whole hairbrained scheme to find out what really happened the night his father died.

After reading Ebershoff's book, I have to say he did a good job of showing all the various and sundry sides of this complicated issue.  I really like how he mixed in Jordan and his mama's story with Ann Eliza Young, a wife of Brigham Young, one of the original Prophets of Mormonism, and with the research of one Kelly Dee, a young woman writing her thesis on the role of polygamy.  It was interesting to look at this one subject from so many different perspectives.

Growing up in Utah, I couldn't help but learn about the Mormons, LDS, Firsts, and the such not.  They sure did carve out a little religious country all their own out here. The Mormons have made it pretty clear that they do not support polygamy these days, and I was happy to see Ebershoff put that into the book.  Most of the Mormons I know are good people who find the practice as abhorrent as I do.

What I've never really understood is how our government can allow the practice of polygamy to continue.  Blah, blah, blah to all that separation of Church and State hullabaloo. We were okay with taking away the right for animal sacrifices and drug use, but we let 60 year old men marry their 13 year old nieces?  What a bunch of shit.  Ebershoff seems to think it's shit too, and I really liked this line he put in the book.  He wrote it as if Ann Eliza said it:  "And if someone were to say I believe in slavery because it is in the Bible, would you say, go then and be free to practice it?"  You said it sister.

Well, I suppose I've talked enough about all of this.  I guess I just wanted to say that I think Ebershoff's book is a good read.  And I'm more than happy to increase my hours at the prison if we decide to start throwing some abusive, neglectful polygamists in jail.

My Thoughts
I chose Officer Cunningham primarily because I could put my views in her voice with a few tweaks.  She was a minor character with no portrayed views on the situation, and I have to admit that I'm stereotyping here based on views of female law enforcement (I just can't see a female officer supporting polygamy).  The cussing is a stereotype too, but there you have it.  Plus the phrase "bunch of shit" pops into my head every time I think about the government's indirect acceptance of polygamy.

As to the book, I recommend it.  The style is unique, the plot-lines fast paced, the history informative, and the themes intriguing.

Other books about polygamy and the FLDS I've read and reviewed include the chosen one by Carol Lynch Williams (fiction) and Escape by Carolyn Williams (non-fiction).