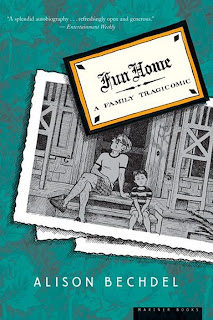 The Short and Sweet of It
Alison Bechdel recounts a childhood complicated by a father in the closet and a personal struggle with gender expectations and sexuality.  This is a case-in-point of why I love memoirs as graphic novels.

A Bit of a Ramble
Wandering around Barnes and Noble in The Villages, an infamous retirement community in Florida, in desperate search for Patrick Ness's The Ask and the Answer, I happened upon this graphic novel.  I had never heard of it before - despite the fact that everyone and their mother had already read it - but it sounded interesting.  I didn't want to buy it at the time because of the silly book buying ban (which I was clearly ready to violate for Ness), but I was so intrigued I actually made a voice recording on my phone to remind myself to buy it later (this has sense become a common practice).  When my birthday came around and I decided to go crazy, I finally bought it.  And now I've finally read it.

Wonderful.  This graphic novel is a powerful recounting of Bechdel's sexual awakening coupled with her dysfunctional relationship with her parents.  A large part of the novel concerns the dichotomy of appearance and reality.  Bechdel's family appears rather perfect: her parents are literary and artistic, the home beautiful, the family rather nuclear.  Yet in reality, the father is a closet homosexual, the mother is struggling to hold it all together, and the children are often times neglected - everyone lives rather solitary lives, removed from each other by secrets, personal obsessions, and disappointment: 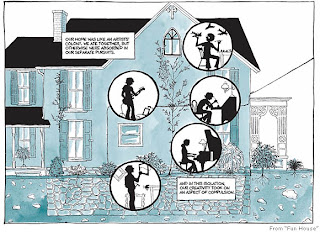 And to top it all off, she relates it all to literary works, sometimes in direct references and other times through the titles of books various characters are reading. At times, books seem to be the primary way Bechdel and her father communicate, and this literary shorthand transferred into her writing.  I was particularly struck by two references:

At the very beginning, she compares her father to Daedalus, a man "indifferent to the human cost of his projects."  Bechdel's father obsessed over home restoration and decoration, pouring his creative energy into projects which he forced upon his kids, and he put more effort into home decor and gardening than he did into raising his children.  I had just finished reading Rick Riordan's The Battle of the Labyrinth, which - as "labyrinth" indicates - revolves around Daedalus. Two references to Daedalus in two days; what are the odds?  Outside of the strange coincidence, I also found the comparison quite apt.

The other reference that caught my eye was the continuous and prolonged comparison of Ulysses to Bechdel and her father's journey.  Ulysses is one of those books I've always wanted to read but pass over continuously for easier fare.

The artwork in Fun Home - as you can see - is deceptively simple in its subdued tones. At first glance, this lack of color suggests monotony, and yet the level of detail in the artwork is striking and adds great depth and import to the images. Speaking of the images, you should be aware that this is a graphic novel for mature audiences: sexual activities are explicitly portrayed. Don't worry; they're not displayed in the below frames. 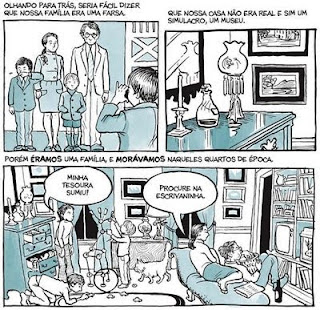 The Filmic Connection
Allison Bechdel, in her comic strip Dykes to Watch Out For, gave us a new way to think about women in film which is now called The Bechdel Test.  The test has viewers ask three questions while watching a film:

While these questions may seem trite, if you give it a whirl, you will probably be amazed at the answers. Certainly the worth of a film is not in the answers to these questions; but it does raise some important questions about the easy acceptance we have towards the unequal representation of women in film. 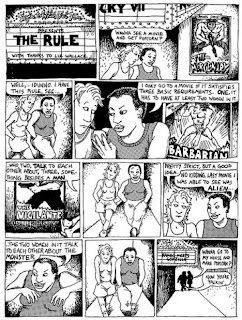 Question:  Why is it that memoirs as graphic novels are so enjoyable?
Posted by Trisha at 5:27 AM