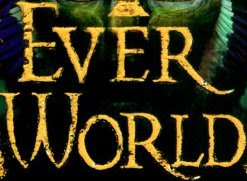 The Short and Sweet of It
Everworld in the words of Christopher:

They moved. They built themselves a little space-time condo. A separate universe.

They brought all the creatures of myth and legend. And they dragged a healthy number of humans across with them, because, hey, what's the point in being a god if there's no one around to kiss your immortal butt?

In Land of Loss, David, Christopher, Jalil, and April continue their adventures in Ever Word, a separate universe they fell into while trying to protect the mysterious Senna (girlfriend, ex-girlfriend, ???, and half-sister). They arrive with the Viking army ready to march against the Aztecs and cut off the head of their heart-eating god, but when that plan goes south quickly, the four have to figure out how to not become human sacrifices. In Enter the Enchanted, the foursome has met up with Senna, and they are stuck in the middle of a fight between Merlin and Loki for the rights to Senna.  Realm of the Reaper centers on the goddess Hel, a horrifying half-alive half-dead woman who wants men for her harem.

A Bit of a Ramble
When I read the first book, Search for Senna, I enjoyed it but didn't feel any rush to read the rest of the series.  While I loved the premise, I felt the book lacked depth. I feel very different now. The EverWorld series is set up with each installment being narrated by a different character - David, Christopher, April, and Jalil in books 1, 2, 3, and 4 respectively - and the trick to reading these books for depth is to think of each book as a separate chapter, not a standalone story. Now that I've finished the first four, I find myself caught up in this strange, complicated, and fantastic world and really falling in love with the characters.

David, the narrator in Search for Senna, is not your typical "reluctant hero"; he actually prefers Everworld and fancies himself becoming a great warrior. Christopher, who narrates Land of Loss, is much closer to "reluctant hero"...well, more reluctant than hero. He just wants to go home. Jalil, who narrates the fourth book, Realm of the Reaper, is the logician who believes that if he can just understand the rules of this new universe, everything will be okay.  April, Enter the Enchanted's narrator, is the most fascinating to me. Of course, this could be because she's female, and hence the third installment included a bit of commentary on gender.

When April finds herself about to head in to battle, unarmed, her thoughts are excellent:


Did I have a choice? I wasn't some helpless female from a 1950s horror movie. I wasn't Fay Wray, screaming again and again as King Kong lifted me up. I believed in equality. I believed that women should be allowed in combat. I believed, I believed all the good feminist stuff I should believe. I was Sigourney Weaver.

But I was so afraid.

So are they, I told myself. So are David and Christopher and Jalil.

The men didn't want to die, either. But they didn't feel like they had a choice. They had to fight. They'd been raised from birth with the understanding that the day might come when they would have to go to war.

I love this quote for two reasons. First, that Sigourney Weaver comment is great; her portrayal of Ripley in Alien is one of the most kick-ass female leads ever. Second, I really like that April acknowledges the fact that the men she is with (boys really) don't have a choice because they have been trained on some level to expect this, to believe that they are responsible for fighting, for protection, for courage and valor and so on.

Reading this actually reminded me of a post Amanda made over at Spiral Upwards where she talks about the necessity for men to receive the same sort of equality push that women have been promoting. It's not okay to demand equal rights while still claiming that you should be the first out of a burning building. As Amanda points out, it's not fair that women can wear whatever they want, fought for the rights to wear pants, but men can't even wear certain colors let alone a dress. (Amanda had to take the post down because too many heavy-handed Thou Shalt Think Like I Do people emailed her crappy comments. This makes me sad and angry as it was a wonderful post)

On another gender-y note, I admire the way Applegate has not made April some shy damsel. At one point in the story, she happens upon David with his shirt off, and she has this wonderful internal conversation about how she should not stare at his chest.  In another fun little event, April is trying to keep her three male traveling companions from coming to blows over "who's in charge" type issues:


"...Behave like civilized human beings, and if you boys can't figure out what that means, ask me and I'll tell you. From now on, if we have disagreements, we have a vote, majority rule, and if it's a tie we do what I say."

"Will you spank me if I'm bad?" [Christopher] asked, batting [his] eyes.

"No," she shot back. "But if any of you want to fight again, I'm going to let you fight. No weapons. Bare fists. And bare bodies, too, like the ancient Greeks."

She flashed her provocative April grin. "I mean, I have to get some entertainment out of this."

It feels like I've been reading a bunch of YA novels where the lead female is shy about sex and willing to let the man take the lead, but April is a strong female who jokes about sex and makes it clear that she's not some shy little flower waiting to be gently plucked by a strong hand.

Which brings me to another interesting point about this series: Sex. At this point, if I had to make a definitive statement about Romance in the Novel, I would say that the focus is on lust not love. How intriguing for a YA series, right? The main love connection is David and Senna, but the relationship is heavily influenced by the fact that Senna has the ability to control people if she can just touch their skin.  She directly causes both David and Christopher to have feelings for her in order to benefit from their protection. Plus, the one time we see them together in Everworld, she is running her hands over David's naked chest, and he's not sure if they've slept together or not. Creepy yes?

Here's one even creepier.  In book four, the goddess Hel comes to Her City (yep, that's what they call it) to capture our unfortunate travelers. The three boys are struck silent and still, but April looks at the goddess and asks her what she wants:


"What do I want?" The creature  pretended to consider. "I want to lie with these three. I want them to pleasure me through the long, cold night. And when they have screamed and cried and obeyed my every whim, I will add their voices to the chorus of agony that lulls me to sleep each night."

Realm of the Reaper

Color me disturbed. Other sexual relationships and references are made throughout the series as well, but I want to make clear that no one's getting down and dirty on the page. It remains PG-13.  One interesting relationship that may be the "love story" is between Jalil and April; but I can't be sure on that point. They seem to be attracted to each other, but nothing definite has been written in the first four books. I mention this only to say that I'm very happy to see this as Jalil is black and April white; and it's not often I read about interracial relationships in YA.


Clearly, I've gotten a bit caught up with the issues within the story, but I feel I should make it very clear that this series is not a social commentary; it's an adventure, a wonderful crazy sprint through gods, legends, witches, knights, human-sacrifices, and fire-breathing dragons. Overall, this series is fun, and I can't wait to get to the rest of them....12 books total, so I still have eight to go!

The Filmic Connection
I really, really, really, really wish someone would turn this series into a movie. I think the setting, characters, and pacing are perfect if they combine a handful of the books into one film. Sadly, not in the works.

Question: Has anyone else read this? Reviewed this series?