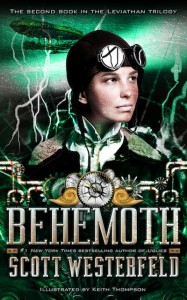 The Short and Sweet of It
Westerfeld brought me into an amazing world in Leviathan, and now in the second installment in the series, he has taken me beyond the surface, introducing a broader worldview. In Behemoth, Alek and Deryn ride the Leviathan towards Istanbul, a diplomatic mission for the British ship and an escape route for the fugitive prince. But things do not go as planned on route or once in the city. Just like with the first, I was entertained throughout, and I am a wee bit stressed that I have to wait until next October to read Goliath, the third in the series.

A Bit of a Ramble
Behemoth, obviously, picks up where Leviathan left off with Alek and Deryn onboard an airship bound for the Ottoman Empire. Alek and the men who fled Austria-Hungary with him are tolerated on the ship, floating somewhere in the space between prisoner and crew. They are responsible for the Clanker engines powering the Darwinist airship, and yet their status an enemies-of-the-state make their relationships on the ship a bit strained. Alek and Deryn, however, are chugging right along in their relationship despite their differing ideologies.

Their relationship really intrigued me in this book. They are growing quite close as friends, but Deryn's feelings are quite obviously of the more romantic variety. This puts the reader in an interesting position since as far as Alek knows, Deryn is Dylan, a male airman.  The insertion of a girl close to Deryn and Alek's age really adds to the drama of the deception, especially when the object of the newcomer's affections is Deryn.

I don't want it to seem like the romance is a large part of the plot because it definitely isn't. This is action-adventure, not romance, and the focus remains on political intrigue and world building.  And the characters. The wonderful, wonderful characters. Outside of Alek and Deryn, we have a clever Count, a conniving biologist, a lovable mechanic, and even a perspicacious beastie. This has been one of my favorite series of the year, and I can't wait for the next installment.

Steampunk is a relatively new genre for me, at least insofar as I am aware of it. So far my experience has been overwhelmingly positive and varied, and I can't wait to read more!

The Book Blogs Search Engine has a wonderful list of reviews!