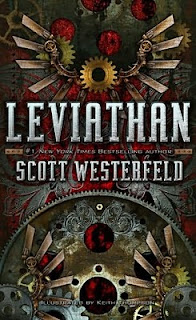 The Short and Sweet of It
Leviathan introduces readers to an alternative history: the brink of World War I re-imagined with steampunk style. The plot follows two very different orphans, one Clanker prince, one Darwinist airman (who's actually a girl), as they make their way in a world ripped apart by ideology. The story is entertaining, with wonderful characters, intriguing themes, and a beautifully-described world.

A Bit of a Ramble
The blending of history and imagination works for me on so many levels. You might wonder why, then, I do not read much 'historical fiction.' The answer is simple: I just do not care about how well a story sticks to the FACTS of history, and that seems to be the primary discussion surrounding historical fiction - did they get it right or not. I like my stories about history to be of the pure imagination variety: steampunk is a perfect example.

Leviathan begins with the assassination of Archduke Franz Ferdinand and his wife, real people, real assassination. The interplay of world powers shares many consistencies with the reality of pre-World War I politics, except in this artfully constructed tale, the ideological issue revolves around Darwinists and Clankers. Darwinists believe in the manipulation of 'life strands' (DNA) in order to create new and useful creatures such as airships which are actually entire ecosystems. Clankers, on the other hand, find these beasties, a term from the book, to be abominations and their progress has been of the mechanical variety. The two sides seem to be on equal footing regarding progess; they've just done it all quite differently.

This relatively familiar argument is excitingly portrayed in the book through amazing and detailed descriptions. It was not difficult to immerse myself in the world Westerfeld created. While the story was full of intrigue - gender-bending secrets, royal assassination attempts, international warfare, and the such not, and of course then we have the technical side of things with the machines and beasties, but despite all of this occurring simultaneously, the story never felt overwhelming or contrived, the last being a hazard when there is so much going on.

When I finished reading, I had a problem. I wanted more. So what did I do? I bought the eBook version and started reading Behemoth. Bad me. I had just bought a bunch of ebooks for vacation.  I ended up finishing both in two days, and now I'm wondering how exactly I am going to wait until next October to read the third.


The Filmic Connection
I've heard, from somewhere, that there are plans to make Leviathan into a movie, but I haven't seen any official announcements. I think the book perfect for adaptation as the visuals would be astounding, and the plot is full of action.

Tons of reviews can be found at the Book Blogs Search Engine!

Question: Anyone know if the adaptation rumor is true?