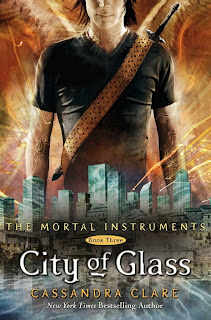 A Bit of a Ramble
These are not small books, and yet I read the first in one sitting, the second in two, and the third in one. Clare really created a story that captured my interest. Both the world she created and the characters she chose to populate it fascinate me. Each character was distinct from the others, diverse, interesting, believable personalities. I want to be friends with these people - or maybe a cool aunt since I'm definitely too old to be their friend. :)

Plot spoilers abound for the next two paragraphs, so be warned. While I don't like to spoil a plot for anyone, the main issue percolating in my mind regarding the book requires some spoilage to discuss. The main love story in the novel is between Clary and Jace. In the second installment, the two find out they are brother and sister, which - obviously - causes some serious problems. The two can't turn off their feelings for each other based on this new information and mental anguish abounds. Ultimately, of course, they find out that they are not, in fact, related; readers should know this from the get-go, but it still causes a few ewwy feelings while reading.

While incest is certainly no laughing matter and has some serious icky-ness to it, I have to admit that I found it a very unique inclusion. Had my faith that the two were not related every wavered I probably wouldn't be so supportive of the strange relationship, but since I knew and they didn't, watching Jace and Clary struggle with their feelings was quite intriguing.

Back to spoiler free comments: You should really read this series, and soon since the movie version is coming out sometime in 2012, and that sort of geeks me out. I think the story lends itself well to the big screen as long as a production company is willing to shell out some cash to keep the cheese out of it.