Book Review: A Vindication of the Rights of Woman 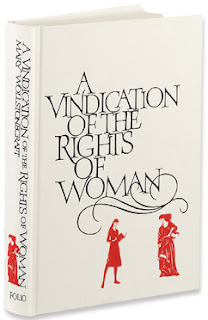 The Short and Sweet of It
At its core Vindication is a response to 18th century theorists (mostly men) who made some very disturbing comments regarding the education, use, and ideal of women. Wollstonecraft writes back to these theorists, both directly addressing their words and positing her own theories. The work is intellectually challenging, thought-provoking, and revolutionary (but best served in small bites).

A Bit of a Ramble
When the Year of Feminist Classics challenge announced Vindication as its first book, I got that feeling in my stomach; you know the one, that rumbling, nervous tick that develops from simultaneously knowing you should read something, wanting to read something, and dreading reading something. Said tick is still in my stomach even as I finish the book.

Vindication, at least in the translation I have, is not an easy read. The diction is downright imposing, grandiose and formal in nature even when Wollstonecraft is letting her snark shine through - which she does rather often thank heavens. I came across a new word on just about every page, and for one page, I actually went to the dictionary five times. Five times. In one page. And I'm a relatively well-versed person.

I don't want to scare anyone away though. Reading Vindication can be a bit tedious, but it's not painful, and ultimately, it is definitely worth it for the thought-provoking ideas Wollstonecraft lays out in this book. I believe her primary goal revolves around arguing that women need to be treated as human beings instead of pretty objects. That the treatment of women as brainless or childlike is detrimental not only to the moral development of women but also to society as a whole. Hear, hear Mary. I even wrote a short response to the idea in a post earlier this month. Her philosophy, or position depending on how you look at it, is exemplified in many interesting, fun, and insightful anecdotes and illustrations. 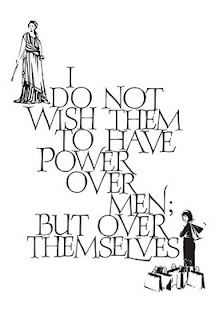 The quite vast number of illustrations was my one issue with the text. I honestly believe that the text could have been cut in half and the same ideas could have been expressed. There is a lot of repetition here, not of examples but of ideas. I do admit, though, that I probably only 100% internalized about 50% of what's going on in the text. Even so, I'm willing to hazard a guess that the text could be pared down quite a bit.

Despite what I felt was a bit of redundancy, seeing Wollstonecraft's ideas and reflecting on how far we've come and how far we've to go in equality was an experience I won't soon forget. While some readers seem to have a problem with what, to them are antiquated ideas, I'm in agreement with Ana from things mean a lot: "It’s probably difficult for a modern feminist to read A Vindication of the Rights of Woman without experiencing some frustration. With the benefit of hindsight, Wollstonecraft’s inconsistencies, failings and limitations absolutely jump at us, while her radical arguments are ones we can mostly afford to take for granted." But as Ana points out, we have the benefit of hindsight, and while reading, we must remember the privileged place from which we critique her text.

This book reminded me of why I love print copies of classics. While I love my nook, trying to annotate on it, to flip back and forth through the pages, to learn from it, is difficult in a way learning from a print copy is not. I know it's primarily a problem of habit, of learning new tricks for a new method of reading, but I do so wish I had read a print version of this one for ease of note-taking and cross-referencing.

I could go on and on about this book, but I think I will leave it to you to read and contemplate on your own!