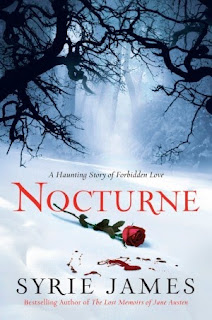 The Short and Sweet of It
A bittersweet romance, Nocturne tells the story of the growing love between an unlikely pairing. While I found the story a bit familiar and predictable, it was nice to have a quick, sexy read.

A Bit of a Ramble
It has been a long time since I've read a straight up romance. I used to devour Nora Roberts, partake of some Elizabeth Lowell, and nibble on Sandra Brown, but for the past few years my guilty pleasure reading has come from YAL rather than the sexy stuff. When I was offered the chance to review Syrie James's new novel though, I jumped at the chance. I adored James's Dracula, My Love and wanted to read some more by this relatively new-to-me author.

Pam from Bookalicious has this to say about Nocturne: "Think Twilight but actually emotionally stable. Micheal having a lot of traits that Edward displays, such as not wanting to hurt the girl he loves and what not, actually pulls it off without the annoying or creepy factor." I could not agree more. I was continuously reminded of Twilight while reading primarily because of the overwhelming passion may cause your death angle; however, unlike Twilight, this angle isn't overplayed to the point of ridiculousness, and it's not quite so freaky. While reading Twilight, I wondered why Bella desired a boy who wanted to kill her so badly; in Nocturne, I got it.

I don't want to suggest that the two books are overly similar though. Nocturne is like Nora Roberts meets Twilight, you know, consenting adults, some logical assessment of emotion, more bittersweet than fuzzy happiness, etc. Nora Roberts actually popped into my mind well before Meyers. The beginning reads like the start of your typical romance: a caring, positive woman is rescued by a dashing and dangerous man. The two are trapped together, secluded from the world, and while each has their secrets and their painful past, the forced intimacy brings them together. Sliding into the story carried the same feeling I would get when I sat down with Roberts - warm and easy.

I did have a few hmmm moments with the book. Much of it was quite predictable - not necessarily a turn off in a romance novel, but still a hmmm moment - and I was offput by the contrived similarities between the two characters. He plays piano, she plays piano. She likes to garden, he has a garden extraordinaire. She loves to read, he loves to read. As a matter of fact (minor plot spoiler ahead), she idolizes one particular author, and lo and behold, he is that author. On a side note, Misery flashed into my head at that point. :)

Overall, the plot was a bit formulaic, but for a down and dirty read, Nocturne is a good choice.


I would love to pass this on for someone else to enjoy, so if you would like to win my copy, please let me know in the comments and leave your email address!