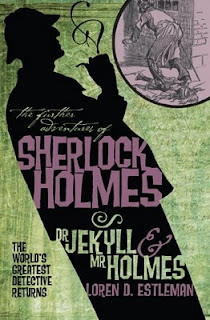 The Short and Sweet of It
Sherlock Holmes returns in this brilliantly conceived and written novel, and to make it even better, he is tackling the case of Jekyll and Hyde.

A Bit of a Ramble
First, a confession. If I have ever read an original Holmes story, I don't remember it. I have the complete Sherlock sitting on my TBR shelves, but I haven't had the motivation to pick it up. I, of course, have a general idea of who Holmes is and what he did since he is such an iconic figure. You would be hard-pressed, I think, to find someone who did not know about Holmes' logical reasoning skills. Does that make me qualified to assess how authentic this story is? Absolutely not. But damned if it didn't feel right. The relationship between Holmes and Watson seemed right on, with the one an eccentric keeping things relatively close to the chest and the other more formal doing a bit of clucking like a mother hen.

Just as Holmes as a character has permeated our culture so too has Dr. Jekyll and his alter ego Mr. Hyde. While combining two so very well known figures may seem kitsch, Estleman pulls it off admirably. Throughout the entire story, I never felt that either icon was treated carelessly. Actually I had no problem integrating this narrative into the original Jekyll and Hyde story. I felt it an interesting conceit to claim that Stevenson's story was based on real events but modified "to protect the innocent".

The story is wonderfully atmospheric with "the crackle of the fire and the staccato ticking of the clock atop the mantelpiece". And to my delight, the story included a bit of the darker side of Victorian London with a mention of Sherlock's cocaine and a quick trip to a burlesque show.

What surprised me most was how engrossed in the story I was despite the fact that the "mystery" was not really a mystery. After all, finding out that Hyde is Jekyll is not really a shocker, but the story didn't suffer from the familiarity. Despite knowing the outcome, I was engaged throughout, the journey to the truth being so much more exciting than the denouement. Following Holmes and Watson as they meticulously ferret out the truth was fascinating, in no small part because their investigation alternates between periods of intense excitement (girly shows, barroom brawls, carriage chases) and quiet contemplation (exactly how I picture Sherlock). 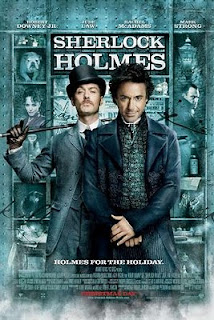 On a side note, I just taught Sherlock Holmes (Guy Ritchie, 2009) in my Introduction to Film course, so I, quite pleasantly, had Robert Downey Jr. and Jude Law stuck in my head as our two main characters. The movie relation made me picture the man who played Jekyll in The League of Extraordinary Gentleman in the same role for the novel. While I typically prefer to picture characters without outside influence, this time I didn't so much mind. It gave the book a very movie-like feel in my head. Can you blame me?

Whether you have read Sherlock or not, whether you have read Jekyll or not, I definitely recommend reading this one. It was a quick, intellectual, exciting read. And I hear there is another pastiche out there pairing Holmes with Dracula. I must have it.

Question: Has anyone read a solid chunk of the original Holmes stories? Am I doing myself a disservice by not reading them?
Posted by Trisha at 5:53 AM