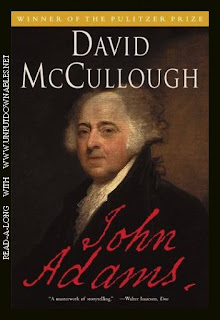 
The Short and Sweet of It
John Adams is one of the most influential and important men in American politics. One of the founding fathers, Adams was instrumental in the creation of the Declaration of Independence and in the American Revolution. He served as the nation's first Vice President and second President. And he was a dedicated husband and father. McCullough relates Adams' life and reveals a turbulent and admirable time in American history.

A Bit of a Ramble
That's right. I finished it. Wallace at Unputdownables hosted a readalong of this historical tome, but said readalong was supposed to end June 24th. Way back in April, I read the first four chapters, and then in May I read chapters five and six. My chapter seven post was put off due to the Armchair BEA, and then the reading/blogging hiatus happened. In other words, I am so far behind posting this, it's rather obnoxious. Yet, I am thrilled I finished the book.

At 751 over-sized historically dense pages, John Adams is not for the faint-of-heart. And yet, it is amazingly readable. McCullough does a wonderful job of bringing the time, culture, and characters to life while simultaneously delivering a wealth of information regarding a complex political climate. The time in which Adams lived was a time of revolution, a time of change, and the book includes many of the notable figures of the time. Thomas Jefferson, of course, features prominently throughout the story, and I really enjoyed the juxtaposition of these two powerful, intelligent, diverse men. I also liked hearing about Benjamin Franklin, Marie Antoinette, Napoleon Bonaparte, George Washington, and most importantly Abigail Adams.

Abigail is a fascinating person. Highly intelligent, vocal in her opinions, and an absolutely perfect companion for John, she captured my interest from the very first, and I've already started looking for books focused more directly on her. This book does more than reveal history; it forms a connection between the readers and the Adams' family.


At the end of the book is a Conversation with David McCullough in which he answers the following question: What do you want readers to get out of this book? McCullough answers, "I want readers to gain an appreciation of the singular, colorful, and immeasurably important man who had so much to do with how we all live." I really, truly did. Adams came alive for me in this book in a way not many "characters" in nonfiction have for me. I feel I knew him.

McCullough also hopes that readers "will get a feeling of having been alive in that vanished time. There's a widespread sense among people today that our founders were just like we are. In part, of course, that's true, but in many ways they were very different from us. I hope people will come away from this book with a far greater understanding of them, and a greater measure of respect and admiration for what those men and women went through and how much we owe them for all they endured and all they achieved."

Absolutely. Reading this book gave me chills. Knowing the facts of the American Revolution in no way compares to knowing the people of it, and McCullough does a fantastic job of creating deep characters the reader can both relate to and admire. These people were deep thinkers, strong in their convictions, and willing to fight to be heard in a way we now lack. I even got teary-eyed from time to time with that sort of national pride people feel for their forefathers.

I definitely recommend reading this book.

Question: Has anyone read other McCullough books? Should I give any one in particular a try?