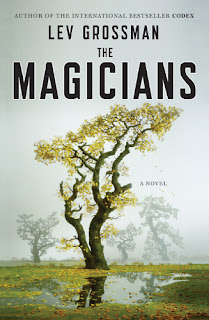 Series Reviews: This is the first in the series.

The Short and Sweet of It
Quentin is waiting. Waiting for something to happen to him, something grand and epic. When he finds himself unexpectedly at a school for magic, he believes his time has come, but he soon finds out that these adventures he's dreamed of are not the key to his happiness.

A Bit of a Ramble
I spent a great deal of time thinking about whether or not this book is YA. On the YA hand, the story centers around teenagers, who divide their time between a boarding school and a magical land from children's books. Thematically, the story is a coming of age tale, focused on the growth of the main character from childhood through the teen years into the early twenties. On the other hand, the story is much darker and more richly told than the typical YA novel. Magic does not bring happiness in this story as it does in so many wizardy YA books. Our protagonist, Quentin, is not a hero fighting an evil wizard, sacrificing for the greater good with an unflinching optimism and a courageous determination. Not. At. All. The story is much more cynical than that.

Carl, over at Stainless Steel Droppings, said it perfectly: "If I were to look at stories like Harry Potter or The Chronicles of Narnia and wonder what it would be like for those stories to be entered into not by young children still in possession of some degree of innocence but instead by disaffected and socially awkward older teenagers, this is the book I would write. If instead of those worlds being everything you always dreamed they would be they turned out to have their own problems, what would that do to you? If you thought going to a magical world would make you supremely happy and yet you still felt empty and lost when you got there, what then?"

Another point which quite firmly places the book outside of YA, to me, is that it covers so much ground, so many years. And then there's the fact that the book more or less reads like a compilation and manipulation of popular YA stories. The boarding school is definitely Hogwarts and the magical land is obviously Narnia. The bridge between Earth and Fillory (the aforementioned magical land) is extremely familiar, but for the life of me, I can't figure out where it comes from. The City, as it is called, is a series of squares with fountains in them which lead to other lands. Help me out guys...where does this come from?!?! I know I've read it. Many other fantasy novels are alluded to or directly referenced throughout the pages as well. Personally, I enjoy this borrowing.

Okay, now I have to make my disclaimer which may seem to make everything I've written so far sort of pointless: I really don't care if the book is YA or not. I love YA and adult fantasy novels; I don't think one is more "literary" than the other; and I find that the distinction is quite blurry many times. But hey, I mention it because it was in my head over the week I read the book. Plus, it gave me a way to think about and discuss a quite popular, although not universally enjoyed, book.

Now I'm off to read The Magician King, the second in the series, which made the Speculative Fiction short list for the Independent Literary Awards!

NOTES
Counts towards Goal #1: Read Books I Own
Posted by Trisha at 11:42 AM