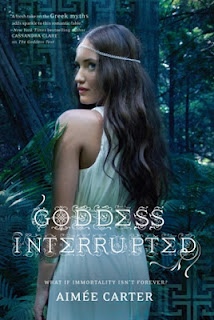 The Short and Sweet of It
Kate passed the tests to become Queen of the Underworld, and she just returned from her six months in the real world. But her return wasn't quite what she expected. Instead of coming home to an attentive husband, she has a still brooding, secretive, aloof co-ruler. When he is abducted by Cronus, she must enlist the help of Persephone, Henry's first wife and possibly his only true love.

A Bit of a Ramble
I think I enjoyed this one much more than the first. Unfortunately I think one of the main reasons I enjoyed it was that Henry is an ass. He's an ass to try to protect her, or maybe because he's confused about his feelings for her and for Persephone, or you know, just because he's like ancient and incapable of caring too greatly about the minutiae of everyday love when there's this big bad guy running around trying to kill gods. Kate's obsession over Henry's love or lack thereof in the midst of the bigger problem really amused me. She's such an insecure wuss; although the ending suggests that she may finally come into her own...maybe...

My biggest disappointment with this one is the lack of awesome fight scenes. There really should have been awesome fight scenes. Instead of major battles, we have lots of talking and wishy-washy-ing around. These are definitely not the ass-kicking, thunderbolt-wielding, face-slamming gods I so adore.

It's funny. I keep complaining about these books, but I still want to read the final installment. A perverse need to know what happens? A hope that things will pick up? Who knows.