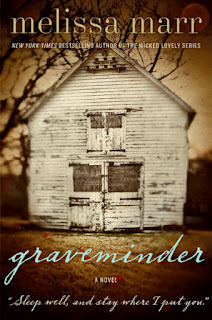 Series Reviews: This is the first in the series.

The Short and Sweet of It
When Rebecca's grandmother dies, she returns to her hometown and finds herself inheriting an unusual job - that of the Graveminder, a woman responsible for keeping the souls of the dead from terrorizing the living. And as luck would have it, Bek's on-again, off-again boyfriend, Byron, is the Undertaker, the man who protects the Graveminder.

A Bit of a Ramble
I really don't have much to say about this one which is one of the reasons why it has taken me so long to write a review (the other reason being my attention-hungry, non-nap-taking child). While I enjoyed the premise, the walking dead, and the idea of the two worlds (that of the living and that of the dead), I think the story just needed more in the way of developing these two worlds. I feel like we've just scratched the surface, and instead of that being an anticipatory feeling, it's more of a blah feeling. There are too many unanswered questions and too many superficial answers. Then we have the don't ask, don't tell situation in the town. The townspeople know something is up, but they just aren't quite curious enough to figure it out. They are willingly turning a blind eye? Really?

I did, however, enjoy the two main characters, Rebecca and Byron, particularly Byron; although that does not in any way mean I have a literary crush on him. He's just not my type. But back to the issue at hand. He felt like an emotionally authentic character if that makes any sense. He has feelings, he expresses those feelings, he acts in accordance with those feelings. Good for him. Rebecca, on the other hand, is unnaturally emotionally stunted in my opinion. PLOT SPOILER She clearly loves Byron, but she won't commit apparently because he was her sister's boyfriend and she and he had a little kiss and then a short time later her sister killed herself. Okay, so I get that it's a weird situation with some guilt attached. But grow up. The sister didn't off herself because of the kiss, and we are talking teen romance here. I know of people who have married their best friend's spouse after the friend passed away. Life and love go on. END PLOT SPOILER

I will probably continue the series, in part because I am so interested in learning more about these worlds. And for the zombie-ish walking dead thingamabobbers.
Posted by Trisha at 6:00 AM