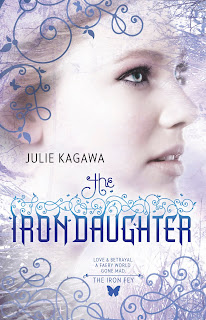 The Short and Sweet of It
After killing the Iron King, Meghan honored her agreement - a must in Nevernever - and returned to the Winter kingdom with Ash to be offered up like a sacrificial lamb to Queen Mab, a rather vicious fairy who happens to be Ash's not-so-maternal mother. But alas, her imprisonment is not to be as she must escape to once again save Nevernever from the Iron Kingdom - but who is sitting the vacated throne these days?

A Bit of a Ramble
I just realized that I didn't even talk about Nevernever in my review of the first book. Maybe I was too concerned with the characters or maybe the land didn't stand out to me as much as it did in this one, but Nevernever is a seriously cool place. While it may be a bit trite, the separation of the fairyland into Summer, Winter, and the Wyld is pretty cool. I like the drastic differences between the three lands. And then you throw in the Iron Kingdom, and you have a varied cultural landscape which I found pretty intriguing.

Another thing I didn't talk about in my first review is the Iron Kingdom, which is ironic since killing the Iron King is like the main point of the first book. Anyway.... The mythology of the series indicates that faeries are born of human belief and sustained by the continuance of that belief. If humans stop believing in something, it ceases to exist. If humans start believing in something, it comes into existence - and hence the Iron Kingdom, a land filled with technology, infused with iron which is fatal to the other faeries of the kingdom. The Iron King wants (a bit in the first, and a lot in the second) to expand his kingdom throughout Nevernever, annihilating the iron-intolerant faeries. Bad Iron King. Bad.

I just ignored the love triangle as much as I could. I mean it was all over in here, but I did my best to blur it out and go to my happy place. What helped with this is the introduction of Iron Horse, who may be neck and neck with Grimalkin as most awesome character. He is blunt, he is loud (he talks in all caps), and he is loyal to fault. Seriously cool dude.

All hail the Iron Horse.
Posted by Trisha at 5:00 AM