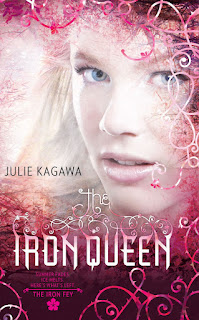 The Short and Sweet of It
Meghan and Ash have been exiled from Nevernever because of their love, but certain people in positions of power rethink their banishment when the two are needed to once again, kill the Iron King (seriously how many iron kings are we going to kill here?)

A Bit of a Ramble
Meghan is finally interesting to me. She was a-okay in the first two books, but she wasn't exactly stealing the show (which, let's face it, could be in part because of the awesomeness of some of the other characters). In this book, I finally felt like she had truly grown, coming into her own and all that. BUT...But how am I supposed to believe that she picked up sword fighting to the point she could successfully defend herself against seasoned fighters? Ash must be one helluva teacher....

Anyhoos, little unbelievabilities aside, I am still enjoying this series quite a bit. There is enough detail in the characters, in the historical background, in the politics of Nevernever, and in the lore to keep me seriously intrigued with the world.

And there are some pretty sexy fighting scenes in here. And who doesn't like sexy fighting? Ash and Puck are both rather badass with the swords and daggers and punches and that whole magic thingamabob. Meghan is badass in this book too, but as I said earlier, I had a small problem with her remarkably fast transition from useless in a fight to kicking ass and taking names in a war.

The obstacles standing in the way of Meghan and Ash's sexy-ever-after are starting to actually amuse me. First we have the whole I'm mortal and you're not. Then we have the I'm a Summer and you're a Winter thing (which to me just sounds like they won't be able to share clothes and make-up). And of course our parents hate each other. And it's against the freaking law for us to be together. Now, we have the SPOILER ALERT I'm the iron queen and you die from iron issue. Wow. That's a lot to handle. Perhaps you two should just give up? END SPOILER. After typing that, I got to thinking - is what I said really a spoiler? I mean look at the title of the book.....

Now I'm off to read the two novellas, Winter's Passage and Summer's Crossing, and the fourth book in the series The Iron Knight, which apparently is from Ash's point of view. Interesting.
Posted by Trisha at 5:00 AM