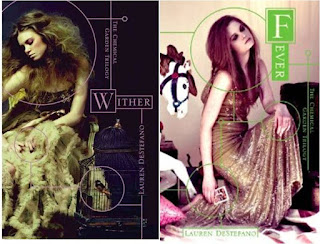 I started reading the Chemical Garden trilogy based on the recommendation of my cousin Krista who has suddenly and wonderfully become quite the reader! Yay for new readers! I am very glad she recommended the series to me, and now, like her, I am awaiting the third installment, Sever, which comes out February 12.

The series follows Rhine, 16 and kidnapped to become a rich man's wife...well, one of his wives. The young age and return to polygamy are due to a strange freak of science. Genetic manipulation resulted in age-determined mortality with males only living to 25 and females to 20. I find this concept intriguing, and I think a closer, psychological look at the cultural consequences of this would be greatly fascinating especially like in this novel where the older generation is still around. But I digress....

While I found the world building a bit less detailed than I would like, the character building is fantastic. Multiple characters are given deep backstories and rich personalities, and their uniqueness and depth is what kept me coming back for more. And to top off my character-love, this may be the first YA love triangle that doesn't annoy me to death. Linden, the rather naive husband, and Gabriel, the not-much-less-naive servant, are not set up as equal love interests; what I mean is, Rhine is in love with Gabriel and doesn't waver back and forth between the two. Linden, however, is not chopped liver and while she may not be in love with him, she does love him.

One problem I have with the series is the unbelievability of Rhine's escape from the more unsavory parts of her society. MINOR PLOT SPOILERS The reasons Rhine is not forced/coerced/etc. to have sex with her husband are weak; the fact that she repeatedly escapes rape later on is unlikely. A small part of me felt like this reluctance to "despoil" Rhine was not organic to the world DeStefano created. END SPOILER

Another problem I have - which I have quite often with romantic literature - is the refusal of Rhine to tell Linden the truth. MINOR PLOT SPOILER In the first book, Rhine finds out that Linden is completely ignorant of, well, reality. He has no clue Rhine and his other wives were kidnapped and forced to be with him. He doesn't know much about the real world at all, but instead of telling him, Rhine leaves him to his ignorance. Why? I actually put the book down at this point because I was so freaking annoyed. Then in the second book, she tells him but not as forcefully or as fully as she should. I'm convinced that many a problem could have been solved by some more honest communication. END SPOILER

All that being said, I recommend getting into this series if you are looking for unique, disturbing, and quick.