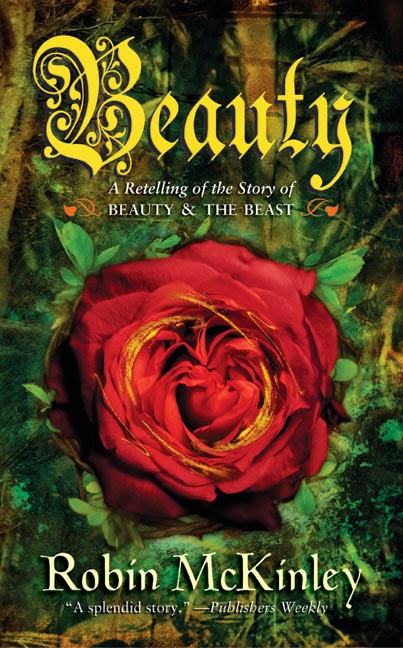 Robin McKinley's Beauty is, as its subtitle states, a retelling of the story of Beauty and the Beast. This new reading stays close enough to the original to feel remarkably authentic while changing enough to make it relatively refreshing.

Fascinatingly - to me at least - much of the story takes place before the Beast is even mentioned. Beauty is a three part story, and it isn't until part 3 that Beauty goes off to live with the Beast. Before Beauty is imprisoned - in a beautiful castle where her every need and want is catered to - she is the bookish daughter of a wealthy merchant living in the city; then she is the daughter of a ruined merchant working in the country. This shift in status and her sisters' love lives are told in the first two parts of the story - perhaps as foils for Beauty's love story in part 3?

Speaking of the sisters, I love their relationship. Grace, Hope, and Beauty (Honour) are so wonderfully distinct and so beautifully connected to each other. Neither of Beauty's sisters is developed enough to truly stand out as a complex character; and yet both of them have enough characterization to evoke sympathy and provide a sense of familial camaraderie.

In this version of the tale, the Beast makes a bargain with Beauty's father: give me one of your daughters or die. Creepy. The father, at Beauty's insistence, agrees. Creepy. Then from day one, the Beast asks Beauty to marry him after dinner every night. Creepy. Despite the creepy, I did appreciate Beauty's slow acceptance of the Beast and her even slower fall into love. Her realization that she is in love with the Beast comes late in the game and has been described by some as underwhelming; this doesn't bother me. Actually I kind of like it that Beauty doesn't crash into love with a big bang and fireworks and sudden, shocking awareness. Sometimes realizing you love someone comes softly, easily, it calms rather than excites.

Unfortunately, I'm not entirely convinced of their love. The Beast's need for a woman to marry him, and his apparent "love" for Beauty from day one seems very unbelievable. Then again, the story seems to hint that the Beast knew of Beauty and her family prior to when we, the readers, believe the actual meeting occurred.

This ambiguity is not confined to the Beast's love. There were pivotal moments that seemed undertold, without the necessary in-the-moment detail and without the background information needed. At times, it felt like the generic idea of "magic" could account for a bit too much. At other times, including the ending, it felt like the generic concept of "fairy tales" could justify events with no true cause-and-effect or reasoning.

I have heard wonderful things about McKinley, so I am making it a point to not let this book turn me off. Any advice on which of her novels I should read next?
Posted by Trisha at 4:00 AM