Smoke Gets in Your Eyes by Caitlin Doughty 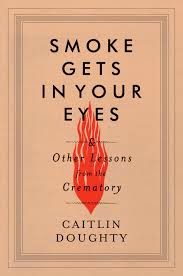 Doughty's obsession with death began young after a tragedy at the mall. Continuing into adulthood, this obsession led her to a job at a crematory, collecting, prepping, and burning the dead. Smoke Gets in Your Eyes is a collection of essays combining her experiences at the crematory and her strong, non-traditional views on death and our treatment of the dead.

My expectations going into this book were rather high. And rather incorrect. I expected a book more focused on death and dying a la Mary Roach's Stiff. Eagerly opening the book, expecting information, history, cultural analysis, I was quickly disappointed in that the book was more focused on Doughty than on death. This is a memoir, not narrative nonfiction as I believed. Unfortunately it took my mind too long to flip switches, and I ended up feeling very lukewarm about the book.

Sprinkled throughout the collection are tidbits of information on historical and contemporary traditions regarding death and dying. Each time they popped up, I was excited and quickly let down due to the lack of detail and depth. Then there were sections that felt oddly placed to me or even disingenuous such as the strangeness with Luke and the thing at the park that was handled really cavalierly all things considered (trying not to spoil things here).

Had I gone into this book with a different mindset, I do believe I would have enjoyed the read. Doughty has a wonderful voice in her writing, and her humor and wit and insight were prevalent throughout. The bodies, alive and dead, that peopled the book were well developed and unique. Plus, I am definitely in the minority here as almost everyone seems to love this book. For better and more positive reviews, try S. Krishna's Books, Estella's Revenge, and Sophisticated Dorkiness,

This may be one of those books that I have to re-read - without my original notions.