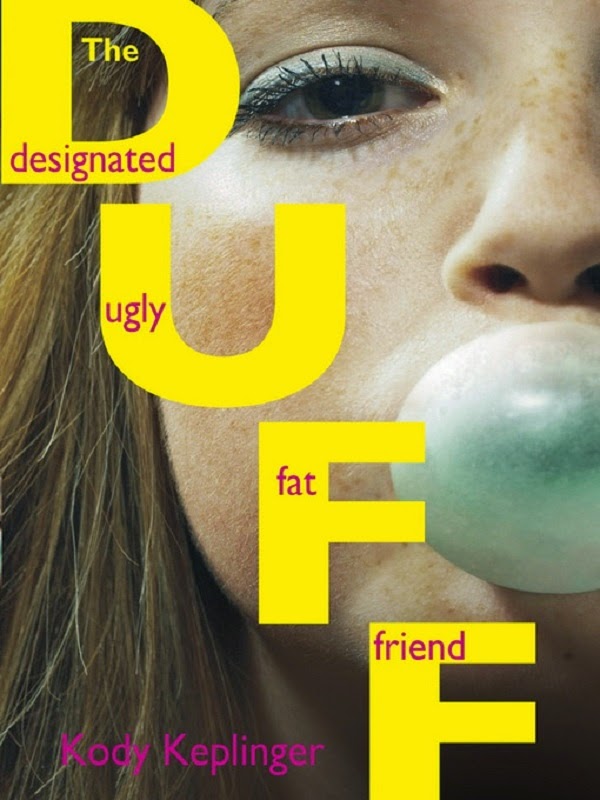 I first heard of The DUFF at BEA 2010 during a YA panel including the author, Kody Keplinger. At the time, I didn't buy the book despite the fact I was intrigued. When I saw the trailer for the movie version a week or so ago, I decided to buy and read. I am very glad I did. Not only did I enjoy the book, I'm also rather fascinated in this particular adaptation.

First the book: Bianca Piper makes a spur of the moment decision and kisses Wesley Rush despite her sincere hatred of the entitled man-whore. From there, the sex-based relationship escalates as Bianca uses Wesley as a distraction from her less-than-perfect home life. But as she spends more time with Wesley, she realizes that he may be more than a simple distraction.

Bring on the unapologetic sex. Bianca uses Wesley; Wesley uses Bianca. Both are fully aware of the situation, and both are perfectly a-okay with it.

Even when the relationship becomes more than just sex, the transition is calm. One doesn't fall madly in love with the other and then subjugate him/herself to the other who has not yet realized his/her true feelings. Neither spends any great deal of time hiding their feelings from the other; in other words, we escape the lack of communication dilemma.

Another check in the plus column for me is the complete and utter lack of transformation in the main characters. Bianca doesn't suddenly pull out her pony tail, throw on a tight dress, and become the stereotypical pretty girl. Wesley doesn't hate being popular or feel like he is putting on this big show. And Wesley doesn't try to change Bianca into anything other than what she is, unlike so many other teen romance heroes.

The third point of awesome - there are NO MEAN GIRLS in this book. No perky, tan, thin. blonde, bitch is trying to hold Bianca down. Actually both of Bianca's best friends are attractive; one is even a cheerleader. And they are good, sweet, true friends. I hate mean girls. I don't mean I hate them in real life. I mean I hate the use of them in fiction because I don't believe these girls exist in real life - or if they do, they're only in like 1 in 100 high schools. And I think it's quite possible that they were only in 1 in 1000 before they became so popular in media.

These three reasons I love the book are also the three reasons I will probably hate the movie. I know next to nothing about the film version, but I'm willing to bet that the Bianca-Wesley sex-for-distraction plot line has been removed, and I bet Bianca pretties herself up a bit or at least Wesley suggests it, and I bet there are mean girls in the movie. Maybe I'm wrong, but I doubt it.

The one problem I had with the book is also more than likely absent in the film. SPOILER ALERT In the book, Bianca's parents are divorcing which causes her father to fall off the wagon (after 18 years). While drunk, he hits Bianca. It only happens once, and he is normally a very sweet man. This event is treated rather superficially in the book, functioning more as a bonding experience for Bianca and Wesley than a look at alcoholism. Let me guess, in the movie Bianca doesn't get hit by her drunk father....END SPOILER

Back to the book. If you haven't read it yet, I suggest you do - and definitely before watching the movie, if you plan on doing so. Anyone who has seen the movie, let me know if I should watch or not.