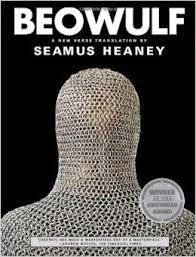 I'm sure many of you have read Beowulf, or at least know the basics of the tale. If not, you can read the Seamus Heaney translation of Beowulf here. Put simply, a young buck named Beowulf comes to Heorot, King Hrothgar's hall, to rid the land of Grendel, a monster who has been decimating the population for over a decade. He kicks Grendel's ass, but that pisses off Grendel's mother who attacks the warriors in retribution. Beowulf, of course, has to go kill her then. After which - and yes, there's more if you can believe it - Beowulf returns home, eventually becomes King, and has to fight off a damn dragon in his old age which does not go well for the dragon or Beowulf.

For this post, I am only interested in discussing one particular part of the poem. Lines 399-606 in Beowulf cover two separate conversations. The first is the meeting of Beowulf, a warrior come to rid Heorot of Grendel, and Hrothgar, King of Heorot. Beowulf speaks first, telling how the stories of Grendel reached him, how he finally had to come help, and asking Hrothgar’s permission to take on this quest. Then, he boasts that since Grendel doesn’t use weapons to fight, he too will “renounce / sword and the shelter of the broad shield” (436-437) and fight Grendel in hand-to-hand combat. Because, of course, that's what a "real man" would do.

Hrothgar replies to Beowulf respectfully and with a short history lesson. Apparently Hrothgar once paid off a family Beowulf’s father had offended, “heal[ing] the feud by paying” (470). After, Beowulf’s father had “acknowledged [Hrothgar] with oaths of allegiance” (471). After establishing their one-degree of separation, Hrothgar admits that he is ashamed of needing others to stop Grendel. He says that despite all their boasting, his “seasoned fighters” (481) are no match for Grendel, and they all end up dead.

Pleasantries exchanged, the party begins, and then we have the second conversation which is between Unferth, one of Hrothgar’s warriors, and Beowulf. Unferth is not a fan of Beowulf; he is envious as “he could not brook or abide the fact / that anyone else alive under heaven / might enjoy greater regard than he did” (503-505). Unferth relates a story about Beowulf and one of his friends, Breca, engaging in a swimming-match. Unferth claims that “it was sheer vanity made [Beowulf] venture out” (509) and that Breca won. He also ominously states that regardless of Beowulf’s skill in fighting, “no one has ever / outlasted an entire night against Grendel” (527-528) and that Beowulf will surely fail. 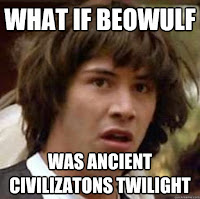 Beowulf does not take kindly to this and he retells the Breca-swimming match tale much to his betterment. He also lays the smack down on Unferth saying “Now I cannot recall / any fight you entered, Unferth, / that bears comparison” (582-583) and Beowulf goes on to remind Unferth, and everyone else in the hall, that Unferth “killed [his] own kith and kin” ( 587) and as such, he “will suffer damnation in the depths of hell” (589). Just to top things off, Beowulf also points out that if Unferth were as great a warrior as he claims to be, then Grendel would “never have got away with / such unchecked atrocity” (592-593).

Beowulf then, much to my surprise, extends the insult to all of the Danes, claiming that Grendel knows:

“he can trample down you DanesTo his heart’s content, humiliate and murderWithout fear of reprisal. But he will find me different.I will show him how Geats shape to killIn the heat of battle. (599-603)

I find this particular quote very interesting as Beowulf is truly insulting all of the Danes, including King Hrothgar. I get the boasting: ‘I’m the biggest, baddest, strongest warrior of all, and I will rid this land of the evil that befalls it’. All of that makes sense. It even makes sense that Beowulf would insult Unferth; after all, the warrior had just questioned Beowulf’s prowess. But for Beowulf to go this far with the insult is a bit crazy to me. What purpose is served by belittling all of them? How do none of the Danes in the hall have a response to this?

Why, do you think, Beowulf’s insult is made in the first place? And, why do you think it passes unremarked upon by the Danes?
Posted by Trisha at 3:00 AM