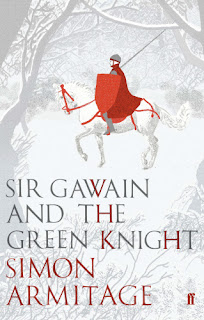 Sir Gawain and the Green Knight begins by situating King Arthur in history. The poet places Arthur in a royal line including Aeneas, Romulus, Ticius, Langobard, and Felix Brutus, men who founded new lands, and some even have these lands named after them (Rome, Tuscany, Lombardy). Then the poet introduces Arthur, “honored above all” (26). All of this is to get the audience ready so they will “listen a little while to [his] tale” (30).

When the tale begins, readers are smacked down into a giant party. With a party spanning Christmas and New Year, it seems like the knights and ladies at Camelot were really living it up: “the feasting lasted a full fortnight and one day, / with more food and drink than a fellow could dream of” (45-46). Everyone was “luminous with joy” (49) which after the amount of drinking going on in Beowulf, I read as ‘ridiculously tipsy”.

The happily inebriated company sits down to eat, but as was the custom, the food could not be had until some form of entertainment commenced, whether a song or a fight. This is where we finally meet Gawain who is sitting next to Guinevere, indicating that he is a knight of good standing. Once the poet has described the seating arrangement and the food, my assigned section ends.

I did get a kick out of the rather detailed description of the dining hall. The poet very carefully describes where everyone is sitting, what food is being served, and in what order it is being served. I wonder why such detail was given. Wouldn’t the audience already know the customs? Why include such extensive descriptions?

More interesting, to me, is the idea that the king wouldn’t eat until someone either told a story or challenged a knight to a fight. The story I get, but the fight? The poet says: “till some chancer had challenged his chosen knight, / dared him, with a lance, to lay life on the line, / to stare death face-to-face and accept defeat / should fortune or fate smile more favorably on his foe” (96-99). I find it quite strange that they would chance injury or even death just for some pre-dinner entertainment. Then again, it is possible that the poet is exaggerating the danger. Considering how often knights dueled in one fashion or another, I can’t see the danger being so immediate or wouldn’t they have died out rather quickly? Does anyone have any insight into this?

Marije Pots calls this the "no adventure - no dinner" custom and claims that the danger is quite real. She also states, based on research, that the death of a knight is "a risk which King Arthur and his knights must have been aware of when the tradition was first introduced". For these knights, "whatever the consequence, the custom 'formed a traditional code of chivalrous practice' and the honour which could be gained from it overcame the fear of death or failure (Pots). Amazing to think that honor meant so much one would risk life and limb before dinner. Do we have any equivalent to this today?

This only covers the very first portion of this tale, which I highly recommend reading. Hopefully I'll get my act together and post on the rest of the story soon.