Brief Overview
Preserved in the Exeter Book, “The Wanderer” is one of the oldest poems we have access to; while the Exeter book dates from the 10th century, much of its content is clearly from an earlier time in the Anglo-Saxon period. An elegiac lament, the poem is a melancholy recitation of grief liberally peppered with nostalgia. I read the Alfred David translation in The Norton Anthology of English Literature, but you can access many translations online (other than David's of course) such as Jeffrey Hopkins translation. 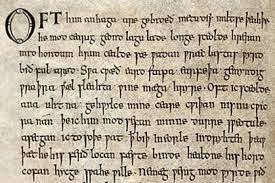 The speaker in the poem, identified as “the wanderer” by the poet, is “wax[ing] dark” (59) about the loss of his lord and fellow warriors. His lament reaches a larger scale in the second half of the poem when he moves from the personal to the universal, mourning the loss of lords and warriors past. It is as if the wanderer is grieving the loss of his culture itself: “all over middle-earth / walls are standing wind-swept and wasted / downed by frost, and dwellings covered with snow” (75-77). It is possible the poem was written as the Anglo-Saxons were moving from paganism to Christianity, and the speaker is reflecting on this cultural shift.

Despite the rather depressing nature of the poem, the wanderer does spend a lot of time defining what it means to be a wise man in a way that does not detract from the melancholy but contains within it a bit of ‘kernel of truth’ type insight that pushes depressing into moving. Then, as now, it seems stories that bring you down are forgiven if they also instruct. The wanderer’s list of requirements for wise men primarily includes remonstrations to be moderate in all things.

The wanderer’s story doesn’t end with the personal and the universal; it also includes the celestial. Overall, the wanderer seems to be arguing that the world is a rather “wretched” (106) place, but we will be better off in heaven “where a fortress stands for us all” (115). This idea that turning to God will lessen our woes bookends the bulk of the poem, and provides some evidence that the poem was created at the meeting of pagan and Christian culture. This is notably evident by the positioning of the more Christian elements which are only located at the very beginning and very end of the poem, suggesting they were add-ons to a complete work already in existence.

The Problem of Translation

In my post responding to prompt #2, I question whether the original poem was meant to be as emotionally wrought as the David translation we read in the anthology. I looked around a bit at other translations, and I noticed a definite difference in tone. For example, our translation reads: “All is wretchedness in the realm of earth” (106), but look at the following translations:
While clearly similar in content (although oddly not the same), these different translations are markedly different in tone. Saying the earth is “wretched” (David 106) is quite different from calling it “irksome” Thorpe 106). A place which is “full of hardship” (Diamond 106; McDonald 106) is not the same as “sorrowful” (Kline 106).

I’m sure it is no surprise to learn that synonyms are not exact matches. After all, revolutionary and freedom fighter are both synonyms of terrorist. The connotations assigned to a word are just as important as the denotation, and this issue must be doubly problematic when translating a language not spoken for hundreds of years.


So to my question: Considering the variance in translation, can we truly analyze or even understand the works as they were intended originally? And if not, how do we assign validity and importance to these poems?
Posted by Trisha at 3:00 AM