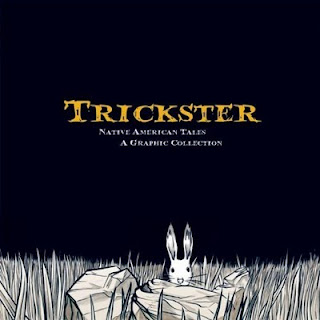 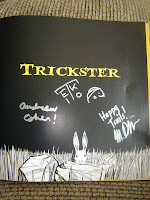 A graphic collection of 21 Native American Tales, Trickster includes the written and illustrative talents of a large number of contributors.  Okay, now to the really important part... Three of those contributors signed my copy at the oh-so-wonderful BEA.

Amy of Amy Reads is the one who turned me on to this book signing, and we both ended up with a copy.  Since the book encompasses 21 tales, we thought we would split the stories for our review.  So for a review of the first 10 stories in the collection, head on over to her blog.

My Thoughts on Tales 11-21
While artfully centered on the concept of Trickster, each story is unique. In the latter half, readers encounter playful bunnies, marriage-ready coyotes, arrogant alligators, various animals playing dead, others actually dying, men who want to fly and boys who hitch rides on geese, flattened raccoons, and dancing monsters.  In some of these stories, readers are rooting for the trickster, and in others, the trickster's victims are pitied; in some, the trickster wins, and in others, loses. All in all, this was a lovely, eclectic read.  The accompanying artwork is rather varied as well.  See for yourself... 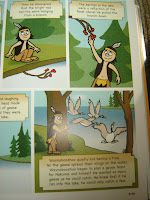 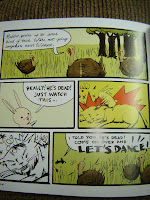 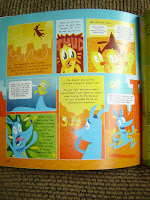 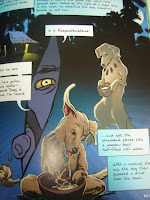 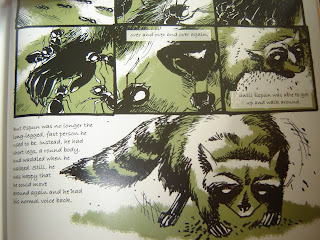 I wish I could take you through each of the eleven stories individually but that would be rather tedious and time consuming, so I'm just going to highlight a few of them.

I reacted most strongly to "When Coyote Decided to Get Married", a (for me) chilling tale.  Great Coyote has decided it's time to settle down, so he asks his human worshipers to find him a wife who meets these requirements:  "She must be chaste, hard-working, and industrious, and must be proper and modest in manner." The villagers, and villagers from all over, bring him beautiful women (who supposedly also carry the qualities Coyote desires) to choose from. In a nearby village, lives a princess, who is of course the most beautiful woman like ever (oh yeah, and she's all those other qualities).  The princess doesn't wish to marry Coyote as she's already in love.  Unfortunately, her father doesn't approve of her beau and has kept her affair secret. So daddy dearest drags her to Coyote and offers her up as the future Mrs. Coyote sees that she is totally hot - and the rest - but then he goes all into a rage because she is not "pure".  He can see that she loves another. So the Great Coyote turns the whole family into stone pillars.  The last paragraph had me fuming:


Because the woman had deceived her family and came without being honest in her heart, Coyote punished them all...These people were punished for the failings of one individual.

On the other hand, "Puapualenalena: Wizard Dog of Waipi'O Valley" makes me very happy, in a totally acid-trip kind of way. So this dog - we'll call him Pua for short - has been stealing some herb for this old guy, and the chief who owns the herb is not too happy about it. The chief and some muscle are going to execute the herb-stealing perpetrators, but the old guy convinces the chief that Pua can recover the sacred shell trumpet which was stolen a few days back.  Pua runs off to recover the stolen item from a group of 'uhane - which are highly reminiscent of dirty, drunk, nasty fraternity boys. Pua gets all tricksy and the frat boys dance themselves into exhaustion, allowing Pua to make off with the sacred shell trumpet. And they all live happily ever after - except for the frat boys. The artwork was a bit psychedelic with vivid colors, chaotic page design, and random shapes. 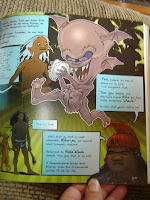 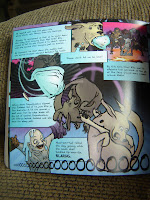 Overall, I enjoyed the book; although it felt a bit childish at times, much more than I was expecting. For the most part, the stories and the artwork reminded me of children's storybooks.  I do think, however, that it would be an excellent way for kids to learn about Native American folklore - same goes for adults who don't mind the childlike.

Trickster Around the Web
If I've missed yours, let me know!

Trickster's very own blog; Graphic Novel Reporter article including images from the book;

Question:  Should books like this be classified as fiction or non-fiction? (think it through)